Continuously separating themselves as one of the most premiere platforms in all of dance music, the fine folks at Electric Hawk have shown they have quite the knack for finding the pulse of the community and some of the most sultry underground talent. Just a little over a year ago they unveiled their debut compilation album In Harmony, a wide-ranging eclectic collection of tracks from some of the brightest up-and-coming minds in the business. Now, they’ve started 2021 with all cylinders firing with the release of their sophomore compilation in the form of In Unity, a delightfully diverse collection featuring blistering pieces from the likes of Redrum, Deadcrow, FRQ NCY, Tek Genesis, NotLö, Sky Suite, Capshun, Eyezic, Spüke, Nik P, and many more! Check out my full thoughts on the compilation, and snag a saucy surprise for this weekend below!

Gently welcoming you into the calming embrace of this sonic voyage, Redrum kicks things off with a full-bodied, elongated hug with ‘Fluid.’ Featuring airy, thought-provoking melodies and a warm glow, this piece is the equivalent of watching the sunrise as you sip your morning coffee in solitude, keeping you firmly grounded in that moment. A wonderful kick-off to In Unity, listeners will be left locked-in as the tracklist moves ever deeper through the compilation.

Feeling like a jolt of electricity that courses through your bones, Nik P’s ‘Crescent’ is a tremendous concoction of delectable drum and bass that makes it nearly impossible to not start wildly wiggling no matter the setting. Deep basslines, swagged-out fills, and sensational grooves combine to create a sound that is truly irresistible. An audible stimulant of only the highest caliber, Nik P has truly outdone himself, and offered up one of the most energetic pieces on the entire compilation.

Settling into the middle of In Unity, the tremendous twosome of NotLö and Sky Suite offer up a sizzling bass-heavy affair in the form of ‘Dismantle’, a piece that successfully rearranges your being at a subatomic level. With nothing dainty about this piece in sight, listeners should expect hearty cascades of thunderous low-end and immense amounts of crunchy delight. It’s not often that two swiftly rising titans of the underground scene put their heads together, but fans will be guaranteed to be more than satisfied from this delightful combination.

For fans of gritty heavy goodness, Deadcrow’s ‘Predator’ is an absolute weapon of a track, capable of leveling entire city blocks with its vicious sound design. Without a doubt the heaviest piece on In Unity, this is one track that’s surely going to be a favorite among the basshead crowd and would be a sure-fire gamechanger on a standard festival rig. For hard wave aficionados, and even fans of genre-bending underground heat, Deadcrow successfully serves up only the spiciest of heat.

Sydney, Australia’s Tek Genesis continues his sonic expansion from his original project William., trading more traditional trap stylings for left-field-centric flavors. His latest track ‘Holographix’ is no exception, sporting an underlying hip-hop aesthetic while pounding your eardrums with heavy, full-bodied bass that gets one’s head nodding ever-so-satisfyingly. A little bit dubby, a little bit wubby, but all around a fantastic time.

One of the most refreshing pieces on In Unity, ‘Epiphany’ brings unmatched energy to the table filled with unbridled and unrelenting positivity. A track that truly makes it difficult not to smile and get up and groove, this equates to a tremendous treat on the ears and a pleasant jolt to the bones. FRQ NCY has truly upped his sound design to immaculate levels, and his artistic prowess will surely carry him to major career milestones in the coming years.

The last piece I’m going to cover from In Unity is the massive three-way collab between Capshun, Eyezic, and Spüke. A gyration-inducing amalgamation of distinct styles that come together to create an atmosphere of inquisitive joy. Peace sitting calmly at the forefront of your mind while your body relishes in the current moment, it ends by drifting off to quietly to nothing, going out just as soothingly as it began.

Wow. 14 tracks. 18 artists. 1 massive success. In Unity perfectly encompasses the boundary-defying attitude that is so prevalent from the fine folks at Electric Hawk, and is a sure sign that they’re here for good. A shining light in the music community, and a welcome home for the best and brightest, their sophomore compilation album is a smash hit. Want to keep the party rolling? Check out their In Unity Virtual Music Festival this Saturday and Sunday (January 23-24) featuring almost every artist included on In Unity, along with the saxxiest man in bass music Griz. If Electric Hawk’s past streams are any indication of what’s to come, this will surely be a can’t miss event. Hope to see you all in the chat! 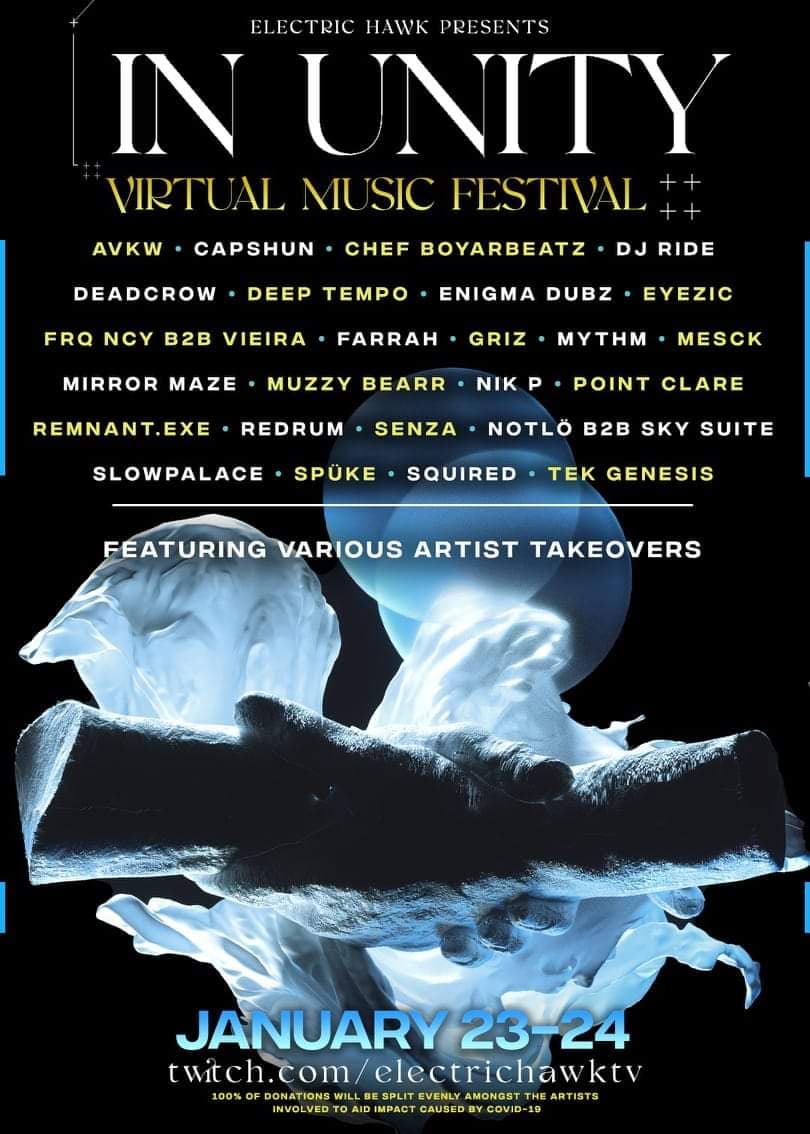 PREMIERE: Secret Recipe & Xotix Drag You Down The 'Rabbithole' – FUXWITHIT

PREMIERE: Secret Recipe & Xotix Drag You Down The 'Rabbithole' – FUXWITHIT